After the Iran Deal: Obama, Netanyahu, and the Future of Israel – Jeffrey Goldberg/The Atlantic

Will Israel’s prime minister recognize that his country faces more than one threat to its existence?

A congregational rabbi, an acquaintance of mine, called the other day in search of sermon advice in advance of Rosh Hashanah. This particular rabbi leans right ritually and left politically. His question: How do I explain to younger congregants that the cause of Israel remains just, given their distaste for the reactionary Benjamin Netanyahu; their incomprehension of Israel’s settlement policy; and their intuitive sympathy for Netanyahu’s adversary, Barack Obama, and the liberal politics Obama represents?
END_OF_DOCUMENT_TOKEN_TO_BE_REPLACED 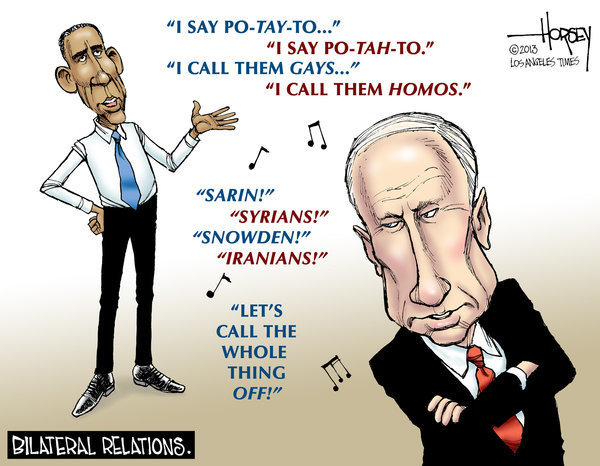 MOSCOW — ON a warm August evening, I found myself sitting with three educated young Russians at the Beverly Hills Diner, a chain restaurant whose gaudy décor includes human-size figures of Porky the Pig and Marilyn Monroe.

They had invited me to join their table, inside a green convertible car, after I had asked a few reporter-type questions about their country. But all talk of Russia kept leading to America.

END_OF_DOCUMENT_TOKEN_TO_BE_REPLACED

What If Iran and the U.S. Keep Talking? – Noah Feldman/Bloomberg View

Now that the Iran nuclear deal is all but an accomplished fact, Iran’s supreme leader Ayatollah Ali Khamenei and Israeli Prime Minister Benjamin Netanyahu actually agree on something: Both have made it clear that they don’t want any more engagement between the U.S. and Iran. Iranian and Israeli hardliners alike want the nuclear deal to be a one-off that doesn’t change the basic structure of regional opposition between Iran and its Shiite proxies on the one hand, and the U.S. and its alliance with Israel and Saudi Arabia on the other.

END_OF_DOCUMENT_TOKEN_TO_BE_REPLACED

HAJJA, Yemen — The airstrike slammed into Al-Sham water-bottling plant at the end of the night shift, killing 13 workers who were minutes away from heading home.

Standing among the strewn bottles, smoldering boxes and pulverized machines a few days after the airstrike here, the owner, Ibrahim al-Razoom, searched in vain for any possible reason that warplanes from a Saudi-led military coalition would have attacked the place.

END_OF_DOCUMENT_TOKEN_TO_BE_REPLACED

The storming of the USA embassy in Tehran, 1979

Spearheaded by the supreme leader, Ayatollah Khamenei, Iran is delicately balancing official support for the nuclear deal with the revolution’s anti-US stance

Tehran, Iran — When the nuclear deal with Iran was reached on July 14, the street celebrations began. Many Iranians were jubilant, hopeful their crippled economy would soon improve, that Iran would reengage with the West – and that decades of US-Iran hostility might finally ease.

In other quarters, critics were not happy. Like their counterparts in Washington, they had spent most of two years noisily opposing the deal – and denouncing any compromise with a perennial enemy.

END_OF_DOCUMENT_TOKEN_TO_BE_REPLACED

Phyllis Bennis: ISIS Is Filling The Holes Left By The US War On Terror – Sean Nevins/MintPress

OCCUPIED WASHINGTON — ISIS is not a guerrilla organization that popped up out of nowhere, figured out how to hold onto territory, and take on the Iraqi and Syrian armies all by themselves, says Phyllis Bennis, director of the New Internationalism Project at the Institute for Policy Studies, a progressive multi-issue think tank in Washington.

ISIS is powerful, she argues, because the group enjoys political and military support from the Sunni communities in Iraq that were left defenseless against the Shiite-dominated government the United States put into power following its occupation of Iraq in 2003.

END_OF_DOCUMENT_TOKEN_TO_BE_REPLACED

SAN DIEGO — Jewish organizations are upset that the University of California is considering adopting a creed against intolerance that does not explicitly mention anti-Semitism, which they say is a longstanding problem on its campuses.

More than two dozen organizations signed a letter sent to the UC board of regents on Thursday expressing their outrage about the proposed “Statement of Principles Against Intolerance” to be discussed at their meeting next week.
END_OF_DOCUMENT_TOKEN_TO_BE_REPLACED