A royal decree removed Crown Prince Moqren bin Abdul Aziz bin Saud as next in line to the throne and replaced him with Prince Mohammed bin Nayef, who headed a crackdown on Al-Qaeda in the oil-rich kingdom a decade ago.
END_OF_DOCUMENT_TOKEN_TO_BE_REPLACED

(Reuters) – The frontlines of Yemen’s messy civil war have barely moved after weeks of Saudi air strikes and fighting between rival factions, but behind the scenes there are faint signs of shifts that could alter the balance on the ground.

At stake is the stability and political future of a country that is home to al Qaeda’s most active international wing, has become a theater of rivalry between top regional powers Saudi Arabia and Iran, and sits on main shipping routes.
END_OF_DOCUMENT_TOKEN_TO_BE_REPLACED

WASHINGTON (AP) — The White House is vigorously pushing back against provisions in a proposed $604 billion Republican defense budget plan that contradict President Barack Obama’s national security priorities on issues ranging from the detention facility at Guantanamo Bay to changes in weapons systems.
END_OF_DOCUMENT_TOKEN_TO_BE_REPLACED

(Reuters) – The European Union’s top diplomat on Tuesday voiced the hope that Iran would play an important but constructive role in a renewed United Nations push to restart negotiations aimed at ending the four-year civil war in Syria.

The U.N. envoy to Syria, Staffan de Mistura, has said he will begin meeting in May with the country’s government, opposition groups and regional powers including Iran to assess by the end of June whether there is any hope brokering an end to the war.
END_OF_DOCUMENT_TOKEN_TO_BE_REPLACED

For decades, the Arab Gulf countries have been a very strong market for Western combat aircraft manufacturers. The Mideast is the largest single export fighter market, accounting for 29%, or $38 billion, of Teal Group’s $130.5 billion 2015-2024 export fighter forecast.  This excludes tens of billions of dollars in weapons, support, and upgrade work. But over the past year, there have been profound political changes and diplomatic shifts in the region. A very brief list of these changes includes: END_OF_DOCUMENT_TOKEN_TO_BE_REPLACED 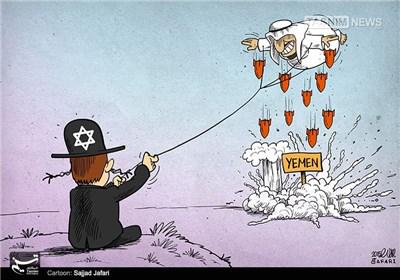 On April 26, I had the privilege of witnessing Yemen’s acting foreign minister, Riad Yassin, deliver a press conference to a rapt audience in London. From an opulent hotel in Kensington, he issued a full-throated defense of his boss, embattled President Abed Rabbo Mansour Hadi, who is exiled in Riyadh, Saudi Arabia, after fleeing from the advancing Houthis, a Zaidi Shiite rebel group that has gradually taken over much of Yemen. The Houthis and Ali Abdullah Saleh — Hadi’s predecessor — Yassin stressed, are responsible for Yemen’s ills; the only solution is international backing for Hadi and his adversaries’ total defeat.
END_OF_DOCUMENT_TOKEN_TO_BE_REPLACED

The Kentucky senator spoke in front of a group of several dozen rabbis and other Jewish community leaders at the National Society for Hebrew Day School Headquarters in Brooklyn as part of an outreach effort to a community widely courted by his party.
END_OF_DOCUMENT_TOKEN_TO_BE_REPLACED

(Reuters) – The U.S. Senate rejected an effort on Tuesday to require any nuclear agreement with Iran to be considered an international treaty, which would have forced any deal to be ratified by two-thirds of the Senate’s 100 members.

The Senate voted 57-39 to reject the measure, which Republican Senator Ron Johnson offered as an amendment to the Iran Nuclear Review Act, a bill requiring an Iran nuclear deal to be reviewed by Congress.
END_OF_DOCUMENT_TOKEN_TO_BE_REPLACED

Obama: Too many troubling police interactions with blacks – AP

WASHINGTON (AP) — As National Guard troops responded to rioting in Baltimore, President Barack Obama said Tuesday there have been too many troubling police interactions with black citizens across American in what he called “a slow-rolling crisis.” But he said there was no excuse for rioters to engage in senseless violence.

Obama said those in Baltimore who stole from businesses and burned buildings and cars should be treated as criminals. “They aren’t protesting, they aren’t making a statement, they’re stealing,” Obama said.
END_OF_DOCUMENT_TOKEN_TO_BE_REPLACED 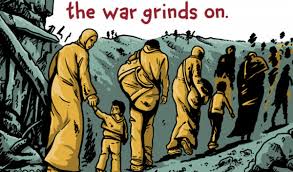 SANAA, Yemen (AP) — More than 300,000 Yemenis have been driven from their homes by a month of violence in the impoverished Arab nation, double the number only two weeks ago, amid escalating fighting with Shiite rebels and the continued Saudi-led air campaign, a United Nations agency said Tuesday.

The report by the Office for the Coordination of Humanitarian Affairs came as warplanes from the Saudi-led coalition throughout the day Tuesday pounded positions of the Shiite rebels, known as Houthis, and allied troops loyal to ousted leader Ali Abdullah Saleh in the capital, Sanaa, and in the south.
END_OF_DOCUMENT_TOKEN_TO_BE_REPLACED

RIYADH (Reuters) – Jets of a Saudi Arabian-led coalition bombed the runway of Sanaa airport on Tuesday afternoon to prevent an Iranian plane from landing in the Yemeni capital, the coalition’s spokesman said.

Brigadier General Ahmed Asseri told Reuters the plane had not coordinated with coalition authorities and the pilot had ignored a warning to turn back. The bombing of the runway made it unusable for planned aid flights, he said.
END_OF_DOCUMENT_TOKEN_TO_BE_REPLACED The night of Thursday, April 23, was a relatively easy one for 25-year-old Hen Mazzig. There was no heckling, no screaming and no one was calling him a murderer.

Mazzig was at the end of a two-week “StandWithUs” tour of the Midwest, where he is sharing stories about his service with the Israeli Defense Force. As part of the Humanitarian Unit, his job was to help Palestinian civilians avoid becoming victims of war. His specific role, he said, involved building infrastructure like roads, clinics, hospitals and schools for Palestinians.
END_OF_DOCUMENT_TOKEN_TO_BE_REPLACED 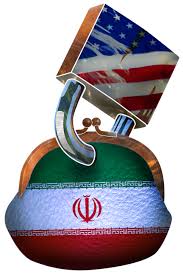 Tehran (AFP) – President Hassan Rouhani warned Tuesday that middlemen who have circumvented sanctions will need to “think of another job” as a potential final nuclear deal brings changes to Iran’s economy.
END_OF_DOCUMENT_TOKEN_TO_BE_REPLACED

BALTIMORE — Hundreds of rifle-toting National Guard members began deploying here on Tuesday morning, lining one of the city’s main thoroughfares and taking up posts around a police station in western Baltimore that had been the scene of earlier protests.

The guardsmen were expected to be joined over the course of the day by thousands of police officers from outside the city as Baltimore struggles to recover from rioting, arson and looting that left 15 police officers injured — six seriously — and damaged or destroyed dozens of businesses, homes and cars. It is not known how many rioters have been injured.

END_OF_DOCUMENT_TOKEN_TO_BE_REPLACED

The most racist places in America, according to Google – The Washington Post Where do America’s most racist people live? “The rural Northeast and South,” suggests a new study just published in PLOS ONE.

The paper introduces a novel but makes-tons-of-sense-when-you-think-about-it method for measuring the incidence of racist attitudes: Google search data. The methodology comes from data scientist Seth Stephens-Davidowitz. He’s used it before to measure the effect of racist attitudes on Barack Obama’s electoral prospects.
END_OF_DOCUMENT_TOKEN_TO_BE_REPLACED

Often seen as a bellwether for national politics, the elections at Birzeit University, near Ramallah, saw Hamas supporters defeat rivals aligned with Fatah. The results came as a surprise at a campus historically known for its allegiance to factions aligned with the Palestine Liberation Organization (PLO), especially Fatah, the ruling party of Palestinian President Mahmoud Abbas.
END_OF_DOCUMENT_TOKEN_TO_BE_REPLACED

The commander of Iran’s ground forces said that American officials planned and executed the terrorist attacks of Sept. 11, 2001, to justify military intervention in the region.

END_OF_DOCUMENT_TOKEN_TO_BE_REPLACED

CNSNews.com) – Israel reportedly carried out at least three airstrikes in Syria over the past two days, and on Sunday its defense minister warned Iran to stop arming Hezbollah, the Lebanese Shi’ite terrorist group that has long been Tehran’s proxy in its fight against Israel.

Israeli officials commented formally on only one of three reported strikes – an attack late Sunday targeting what the Israeli Defense Forces (IDF) said was “a group of armed terrorists” planting explosives in Israeli territory along the Israeli-Syria border.
END_OF_DOCUMENT_TOKEN_TO_BE_REPLACED

This weekend regional media outlets claimed that the Israeli Air Force carried out two sets of strikes on multiple targets in the Syrian-Lebanese border area during the April 21-April 25 period. The first set of strikes (which also remains the least confirmed) targeted a Hezbollah weapons convoy traveling in the border area on April 22, hitting at least three trucks and killing at least one commander. The second set of strikes occurred during the overnight hours of April 24-25, and are believed to have hit at least three targets in heavily militarized areas of eastern Qalamoun, north of Damascus, which host some of the Assad regime’s most loyal and well-equipped units. The units hit include the 155th Scud missile brigade which has bases near the Damascus suburb al-Qutayfa, and the 65th Armored Brigade in areas around the Qalamoun town of Yabroud. In total, claims by Syrian rebels and foreign media outlets suggest that this set of strikes included at least three targets throughout the Qalamoun region, killing a number of Syrian and Hezbollah troops.
END_OF_DOCUMENT_TOKEN_TO_BE_REPLACED

Never underestimate the power of denial. It is always easier and quicker to deny wrongdoing than to admit culpability or explain oneself. It stifles legitimate scrutiny in favour of a simplistic “yes / no” argument that is designed to confuse and deceive. This is what makes denial so appealing, and hence so prevalent in cases of injustice.

When it comes to the plight of the Palestinians, denial is the default setting of the pro-Israel propaganda machine. The infamous quote from former Prime Minister Golda Meir – “there is no such thing as Palestinians” – epitomises Israeli denial at arguably its most fundamental.
END_OF_DOCUMENT_TOKEN_TO_BE_REPLACED 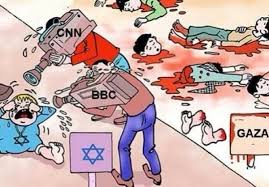 UNITED NATIONS (AP) — A U.N. inquiry has found that at least 44 Palestinians were killed and at least 227 injured by “Israeli actions,” including direct mortar strikes, while sheltering at U.N. locations during last year’s Gaza war.

UNITED NATIONS (Reuters) – Iran on Monday demanded that countries possessing nuclear weapons scrap any plans to modernize or extend the life of their atomic arsenals, while branding Israel a threat to the region due to its presumed nuclear stockpile.

Speaking on behalf of the 120-nation Non-Aligned Movement, Iranian Foreign Minister Mohammad Javad Zarif told signatories to the 1970 nuclear Non-Proliferation Treaty (NPT) that there should be no limits on the transfer of nuclear technology and know-how to NPT signatories.
END_OF_DOCUMENT_TOKEN_TO_BE_REPLACED

BERLIN (JTA) — Police in Berlin have apologized to German fans of the Ingolstadt Soccer Club for making them roll up the Israeli flag they were displaying during a match in the city.

Almog Cohen, an Israeli who plays for Ingolstadt, reportedly tweeted in Hebrew after Sunday’s incident in the game against Union Berlin that a stadium marshal told the fans “no Jew-flags” were allowed.
END_OF_DOCUMENT_TOKEN_TO_BE_REPLACED

WASHINGTON — With Prime Minister Benjamin Netanyahu working to establish a new coalition, a top US State Department official warned that the composition of his government, and its approach to the two-state solution, could have serious implications for Washington’s support for Israel, particularly in the United Nations.

“We will be watching very closely to see what happens after a new government is formed on this issue of working toward two states living side by side in peace and security,” Undersecretary of State for Political Affairs Wendy Sherman told a gathering of Reform Jewish leaders near Washington, DC.
END_OF_DOCUMENT_TOKEN_TO_BE_REPLACED

Mubarak made these comments during a phone interview Sunday evening on satellite channel Sada Al-Balad with TV host Ahmed Mousa. The former president narrated events relating to the withdrawal of Israel from the Sinai Peninsula in 25 April 1982, in commemoration of the 33rd anniversary of Sinai Liberation Day.
END_OF_DOCUMENT_TOKEN_TO_BE_REPLACED

Stanford frat house vandalized with swastikas – The Times of Israel 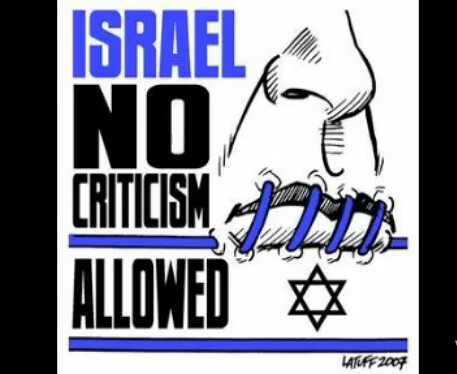 Swastikas along with personal slurs and epithets were painted on a fraternity house on the Stanford University campus.

The graffiti was discovered on the Sigma Alpha Epsilon house on Saturday night by fraternity members, the Stanford Daily reported on its website Sunday.
END_OF_DOCUMENT_TOKEN_TO_BE_REPLACED

Some 58 percent of voters back the outline deal, which would curb Iran’s atomic program for more than a decade and subject Tehran to tough inspections.
END_OF_DOCUMENT_TOKEN_TO_BE_REPLACED