BALTIMORE (Reuters) – Protesters marched against police violence in cities from New York to Denver on Wednesday, and a large demonstration in Baltimore ended peacefully two days after rioting over the death of a black man injured in police custody.

The protests were the latest actions against racial profiling and police use of lethal force sparked by the deaths of African-American men in Cleveland; Ferguson, Missouri; New York and elsewhere in the past year.

In Baltimore, 3,000 National Guard troops and police stood by to enforce a 10 p.m. curfew as thousands of peaceful marchers converged on city hall. The march capped a day of calm in a city that two days earlier saw its worst rioting in decades.

Protesters in the mostly black city of Baltimore sought answers about the fate of Freddie Gray, 25, who died after suffering spinal injuries while in police custody. Police are due on Friday to give their findings on Gray’s death to prosecutors but said no information will be made public.

“Can’t stop, won’t stop, put killer cops in cell blocks,” chanted protesters in the biggest march in Baltimore since Gray died on April 19, a week after his arrest and injury.

Nineteen buildings and dozens of cars burned, stores were looted and 20 officers were hurt in Baltimore on Monday in a spasm of violence hours after Gray’s funeral.

“This is for everyone who died wrongly at the hands of police,” said Noy Brown-Frisby, a 35-year-old hairstylist who attended Wednesday’s march with her young daughter.

But she recognized that high crime in the city of 620,000 people complicates relations with the police.

“There is so much tension. The crime is so high that when there is interaction between police and the community it becomes volatile,” she said.

In New York City, police on scooters used batons to try to keep protesters on sidewalks and arrested people who moved into traffic.

The demonstrations from Union Square to Times Square and elsewhere, were reminiscent of similar demonstrations in December after a grand jury decided against charges in the case of Eric Garner, an unarmed black man who died after a police officer put him in a chokehold.

NO REPORT ON FRIDAY

Many Baltimore citizens were hoping to find out the details of Gray’s death on Friday when police have said they would conclude their investigation. 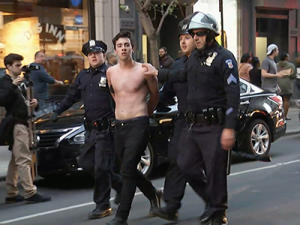 “The best (outcome) would be one where the officers were disciplined and officials realized what happened and owned up to their wrongdoing,” said Larry Little, 22, a Baltimore resident who joined the march on Wednesday.

Gray was arrested on April 12 after fleeing from police in a high-crime area. He was carrying a switchblade knife. He died a week later.

But police said on Wednesday that information would be turned over to the state attorney’s office and could not be made public because prosecutors still have to decide whether to bring charges.

The U.S. Department of Justice is conducting a separate probe into possible civil rights violations in Gray’s death.

The Washington Post reported that a prisoner who was in the same van as Gray, but who could not see him, heard him banging against the walls and believed he was intentionally trying to injure himself. The newspaper cited a police document.

Baltimore’s Major League Baseball team, the Orioles, played the Chicago White Sox in an empty stadium, a sign of the tenuous security situation.

Police have arrested close to 270 people since Monday, 18 of them on Wednesday. Police Commissioner Anthony Batts said more than 100 people had been released without being charged, because officials could not keep up with the paperwork, but he said charges would be brought later.

The violence in Baltimore prompted national figures – from the new U.S. Attorney General Loretta Lynch to Democratic presidential hopeful Hillary Clinton – to weigh in and vow to work on improving law enforcement and criminal justice in minority communities nationwide.

Lynch, sworn in as attorney general on Monday, called Baltimore’s riots “senseless acts of violence” that are counterproductive to the ultimate goal of “developing a respectful conversation within the Baltimore community and across the nation about the way our law enforcement officers interact” with residents.

The Baltimore neighborhood that saw the worst of the violence was already filled with many burned-out buildings and vacant lots that had not been rebuilt since the 1968 riots that followed the assassination of civil rights leader Martin Luther King Jr.